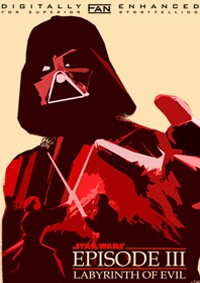 The following information and more can be found at FanEdit.org, home of the Fan Edits.

***This is version 7 of this fan edit. The primary difference for this new version is the use of deleted scene footage upscaled by bryantmh using AI for much better integration than in prior versions. (Other changes are removal of Chewbacca’s voice in one scene with help from danieldubb and Chase Adams and reinstating Obi-Wan’s line “For democracy!”***

Running time is about 116 minutes.

This is the 1080p BluRay-compliant mkv version. Also available as a 720p iTunes version, and a DVD5.

The third of the revamped 9000 Series, Labyrinth Of Evil delivers a re-crafted perspective on Star Wars Episode III in keeping with the drive of the original trilogy of films. Anakins fall to the dark side is portrayed in a more believable way, with political motivations that are ignited by, rather than preceded by, a desire to save his wife. Padmes role is expanded, and her fate is made to match her daughters memories.

By stripping away extraneous tangents and bolstering attention to character development, this edit seeks to improve the original film. The original trilogy is regarded as the template toward which the prequels strive. The prequels are made to submit to the continuity and drive of the originals to the degree possible.

The following three goals are held in balance.
1) Bend the prequels to the story continuity of the original trilogy and the impressions it gives.
2) Improve the prequels in and of themselves, as films, through conventional FanFix methodology. The pacing is improved, dialogue trimmed, and characters are developed better. This is the most readily apparent of these three goals that can be seen in The Phantom Edit, for example. The edits should be viable as films on their own.
3) They ought to be functional as replacements for the original versions. This means leaving the films thoroughly "prequel" nature unaltered, respecting the broad strokes of Star Wars orthodoxy, and avoiding making changes that would betray to the audience that theyre watching a fan edit. In other words, none of the other two listed goals should put undue stress on the goal of producing something that would have been suitable to have been released in 2005.

Trimmed the buzz droid sequence. This and other trims serve to downplay Obi-Wans familiarity with R2 somewhat.

Removed Obi-Wan leaping from his cockpit, and his little jump during the fight with the battle droids.

Dooku is not mentioned until he arrives to confront the Jedi.

Obi-Wan never refers to R2 by name. Its not much, but its a small way to gloss over the tension between the continuity of the PT and OT.

Partially reinstated confrontation with destroyer and battle droids while boarding the elevator.

A match cut removes bad dialogue before the duel.

Removed sound effects in the rear audio channels that were lifted straight from The Empire Strikes Back.

Cut away as the railing starts to land on Obi-Wan. The original made it look like his legs were crushed.

Anakin quickly decapitates Dooku with no influence from Palpatine. However, he still questions his actions afterward. (V6 reinstates Palpatine instructing Anakin to kill Dooku, whereas V5 and prior removed this completely.)

Trimmed dialogue and tightened up the action sequence leading up to the bridge fight, including removing R2 slapstick humor. (V6 goes further to remove R2 striking the super battle droid with electricity, thanks for Siliconmaster and Adam Burrows.)

Removed as much silliness as possible during the fight on the bridge of the Invisible Hand.

Grievous says, "Time to abandon ship" as he breaks the hull and escapes.

Reinstated snippet in which Grievous mans the escape pod and launches, addressing an abrupt musical transition introduced in prior versions of the fan edit. Used dialogue from The Clone Wars to replace line that was moved to earlier.

Lightly trimmed dialogue during the crash landing on Coruscant.

Trimmed Anakin and Obi-Wans dialogue recounting past adventures we never get to see.

In this version, we see Anakins political motivations for turning to the dark side and tensions with Padme before he develops concerns about her impending doom. He is only shown to have one nightmare about her, and the order of scenes implies it was planted by Palpatine.

Anakin never tells Padme about his nightmare, another conflict within him.

Replaced scene with Windu hearing that Obi-Wan has engaged Grievous with deleted scene "A Plot to Destroy the Jedi” earlier in the film. (V6 repositions this scene immediately prior to Anakin missing the briefing, up from right before Anakin’s appointment to the Council as in prior versions of this fan edit.)

Dialogue trimmed in most scenes, especially during Anakins appointment to the Jedi Council.

Borrowed audio work from MalàStrana to incorporate an eerie rendition of the Imperial March as Windu denies Anakin the rank of Master.

Reinstated the deleted scene in Bail Organas apartment, gently color correcting it to appear to be a bit later in the day, in order to give Padme something worthwhile to do in the film and contribute to a sense of tension between her and Anakin.

Reinstated a brief reference to the Jedi Code.

Moved Grievous arrival on Utupau to after Anakin and Padmes tense political discussion.

Placed Anakins sole nightmare after this, with the opera scene right afterward.

During the opera scene, removed reference to midichlorians. Also removed Palpatine calling Anakin out on spying on him. It is more effective to let Anakin carry that tension inwardly only, and provide no relief.

Reinstated reference to Plagueis having learned to “create life” and an ability to cheat death.

Chewbacca’s onscreen appearances have been altered to either remove him or disguise him by recoloring his fur and adding alternate clothing. (Thanks to Poppasketti for visual FX, and to danieldubb and Chase Adams for help with audio)

Reinstated the sunset meeting between the loyalists and Palpatine, further elaborating on the tension between Anakin and Padme.

Anakin is depicted as being in his right mind up until he formally joins the dark side. The scene where he seems to have paranoia about Obi-Wan being as Padmes apartment is gone. I guess we can interpret his crazed psyche at the end of the film as being caused by using the dark side. Your guess is as good as mine, but its better than having his personality fluctuate throughout the film.

Along with other dialogue trims, removed Obi-Wan telling the corduroy man to summon warriors.

Reinstated Boga’s introduction, though trimmed her very slightly later on.

Removed the first half of Grievous line, "It is a volcanic planet. You will be safe there." Volcanic equals safe?

Trimmed Grievous lunge that Obi-Wan does not react to. It betrays the chasm between the CGI and live elements.

Grievous retreats as soon as the clone troops arrive, in keeping with what little characterization about him we have seen so far, rather than gloating a bit and then running away.

Removed the now redundant scene in the war room talking about a plot to destroy the Jedi.

Trimmed dialogue as Palpatine reveals his true nature to Anakin in order to slightly downplay Padme as Anakins only real motive for joining the dark side.

Trimmed dialogue as Windu and his gang confront Palpatine. It reads, "Are you threatening me, Master Jedi?" "Not yet."

As Anakin enters the scene, Windu is already going to kill Palpatine, who defends himself with force lightning and sends Windu falling to his death. I made use of an idea from Kerrs fan edit that L8wrtr also used to imply that the wrinkly face was Palpatines true appearance all along. Palpatine uses lightning only once instead of twice. Hes human-looking at the start, then the lights go out, and he has a monster face when they come back on. Trust me, its better than it sounds.

Anakin and Palpatine dont mention Padme during the knighting of Vader scene. Other dialogue is trimmed a little for effectiveness. The idea is that saving Padmes life is the spark that ignites a myriad of other factors for Anakins turn toward evil.

Added a short scene in which Jedi are being slaughtered in the Temple while Anakin oversees.

After Yodas brief and only use of his lightsaber in the whole trilogy, removed the scene where Anakin ignites his saber on a roomful of children. By cutting this, Anakins slip toward depravity can be seen as a little more gradual. Plus my version of the trilogy does away with the idea that Jedi are harvested as infants and raised in a cult environment. The term "youngling" doesnt appear in these edits.

Removed Yodas interactions with the Wookiees after Order 66.

Removed Obi-Wan and Yodas fight to enter the Temple. The line of dialogue about everyone being preoccupied about the Senate session is good enough.

Because I removed the duel between Yoda and Palpatine, I also removed discussion about said duel after Obi-Wan sees the security hologram. Also removed Yodas line that sees Anakin and Vader as separate people; it sounds like something he would have said in Return of the Jedi, rather than immediately after Anakin turned.

Padme is never informed about Anakin killing children, for the same reason as in my edit of Episode II. It is out of character for her to take it with anything other that indignation. Trimmed other dialogue during this scene for effectiveness.

Though no changes have been made for V6 to the contents of the scene between Padme and Obi-Wan, the audio has been reworked to avoid breaking up the musical score, allowing it to play out in a more aesthetically pleasing way.

Removed Obi-Wan sneaking into the bathroom on Padmes ship. If you missed him during the wide shot, itll be a surprise when he shows up later.

Removed most asinine dialogue as Padme arrives and confronts Anakin, including "I saw your ship." No reference to younglings. Tension ratchets between the two as Anakin finds out Padme told Obi-Wan about their relationship. No discussion about Anakin trying to save Padme; she never knew about Anakins fears about that. Anakin doesnt seem focused on it himself anymore.

The duel on Mustafar plays out in full without cutting away to other plot threads. There is no duel between Yoda and Sidious. Not that the EU has bearing on my decisions, but I rather like Timothy Zahns description in Spectre Of The Past: "If Lukes own current level of knowledge was any indication, Yoda could surely have defeated the Emperor all by himself. Yet hed chosen instead to leave that task to Luke and the Rebel Alliance."

Removed dialogue about the ‘high ground’ at the end of the duel.

Reinstated Obi-Wan bemoaning the fall of the Chosen One. (Formerly removed in prior versions of this fan edit, originally due to having removed the Chosen One concept altogether, then liking how it came to be anyway.)

The ending of the film was great fun to work on. Youll hear my own voice replacing that of the medical droid. His prognosis is not that shes dying, but rather that she will survive without ever fully recovering.

Thanks to Snooker and Sir Ridley, removed R2 and 3PO from the birth of the twins. This eases continuity tensions with the original trilogy, avoiding awkward questions like, “Shouldn’t R2 have recognized Yoda on Dagobah?”

Courtesy of Hundsdorfex, replaced shot of Taintive IV descending toward Naboo with the ship streaking through space.

Trimmed dialogue aboard the Taintive IV to accommodate the idea that Padmé survives to travel to Alderaan with Leia.

Replaced Padmes funeral with the deleted scene of Yoda arriving on Dagobah.

Padme is seen cradling an infant Leia on Alderaan, using footage from The Other Boleyn Girl, with her eye color corrected by Hundsdorfex. (Idea by The Cutter, also used in Q2s edit.)

Added credits for myself, workprint viewers, contributors, and acknowledgements of all other ROTS "FanFix" fan edits to date.